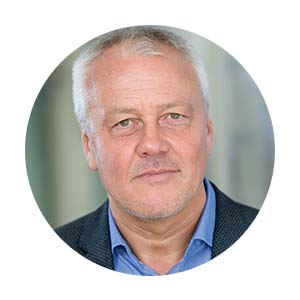 Markus Sauer studied Chemistry at the University Heidelberg where he received his Diploma in 1991 and finished his PhD in 1995 in Physical Chemistry. 1998 he has been awarded the BioFuture Prize for Detection, Analysis and Handling of Single Molecules, which allowed him to establish his own group for single-molecule fluorescence detection and single-molecule DNA sequencing. Since 2009 he is Professor and Chair of the Department of Biotechnology and Biophysics at the Julius Maximilian University Würzburg. His research interests are single-molecule fluorescence spectroscopy and imaging with a particular focus on super-resolution fluorescence imaging by direct stochastic optical reconstruction microscopy (dSTORM) and its applications in neurobiology and immunology. 2021 he has been awarded a ERC Synergy Grant together with Silvio Rizzoli and Ed Boyden to work on Ultraresolution Imaging. He has published more than 270 journal papers and coordinates several super-resolution microscopy projects.